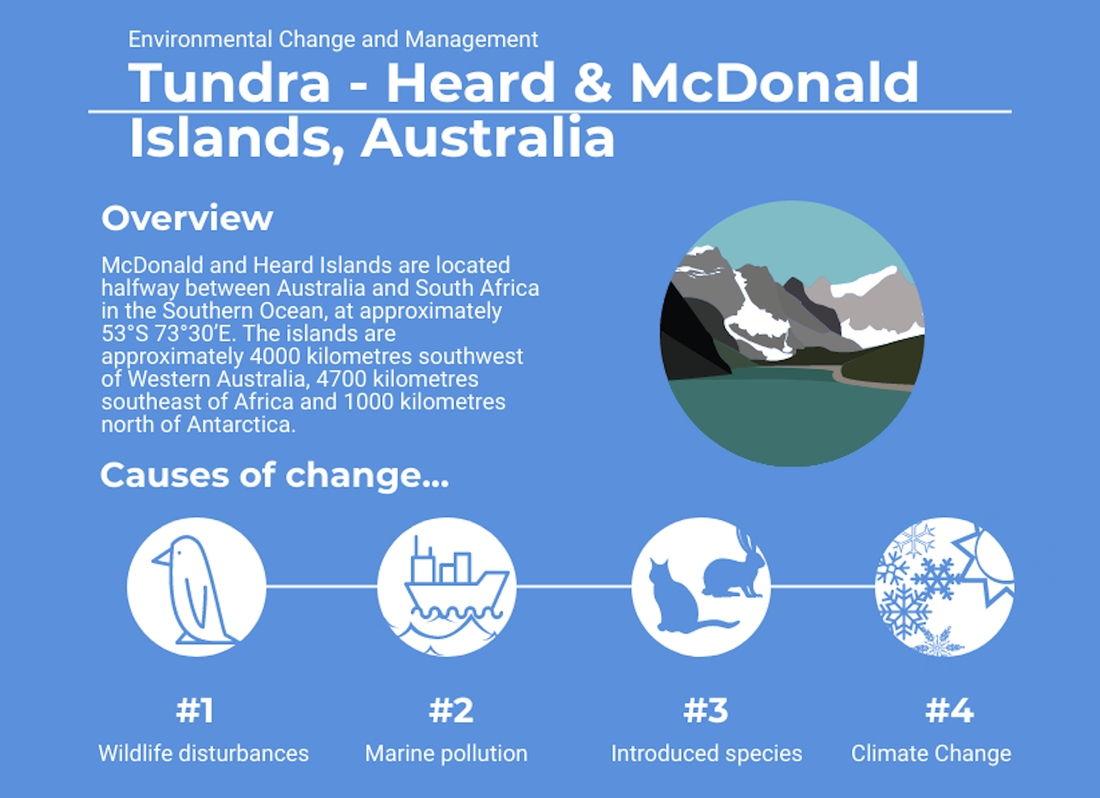 Natural processes
Natural processes are an ongoing cause of change to Heard and McDonald Islands. Processes such as volcanism, glacial retreat and advance and storms can change the landscape. Animal population change such increase in fur seal populations could lead to changes such as competition over breeding or nesting sites and food sources, vegetation trampling and eutrophication of water.

Human contact
The first recorded visit to to Heard Island occurred in 1855. Since that time there have only been about 240 shore-based visits, and only two lists to McDonald Islands. The purpose of visits include sealing (in the past), research and management, private expeditions and surveillance. Visitors must apply to the Australian Antarctic Division for a permit to visit Heard Island. It’s vast distance from populated areas, extreme weather and sailing conditions and high cost to visit deter many visitors. No commercial tours operate to Heard Island.
​
Introduced Species
An alien species is an organism that has been introduced to the Heard Island and McDonald Islands as a result of direct or indirect human activity. Many of the Southern Ocean islands have been affected by introduced species such as cats, rabbits, rodents, etc. which can impact on breeding populations of endemic species and result in reductions of biodiversity and local extinctions. Mcdonald Island has no alien species currently. Heard Island has two plants and two insect species that have been introduced. Heard Island and McDonald Islands are some of the least biologically-disturbed regions on the planet.

Climate change
There has been an increase in the average annual air temperature of nearly 1 degree C between 1948 to 1954 and 1997 to 2001. This is resulting in glacial retreat and the creation of lagoon and lakes. Many glacier at Heard Island have retreated dramatically. The Southern Ocean is demonstrating a corresponding warming.

Wildlife disturbances
In locations where human activity and wildlife habitat overlap, wildlife disturbances such as burrow collapses, changes to wildlife movements or breeding can occur. Wildlife colonies on Heard and McDonald Islands are concentrated in the ice-free coastal areas. These are also the most popular sites for human activities. Wildlife may react to disturbances by to relocate or refrain from breeding, or deserting certain locations. It can also result in increased likelihood of mortality rates. In marine environments disturbances may take the form of boat collisions, or interference through noise and lights. Illegal fishing can also impact on population numbers and diversity.

Marine pollution
Fuel spills, discharge of waste water and sewage and rubbish disposal can result from shipping activities. Marine mammals and seabirds can become entangled in floating debris such as discarded fishing nets. This can result in reduced mobility, starvation, amputation, smothering or drowning.

Terrestrial pollution
Pollution on land can include grey water and sewage, which may increase nutrients or risk of disease. Fuel and chemical spills could result in long lasting impacts such as soil contamination, vegetation degradation or harm to wildlife.